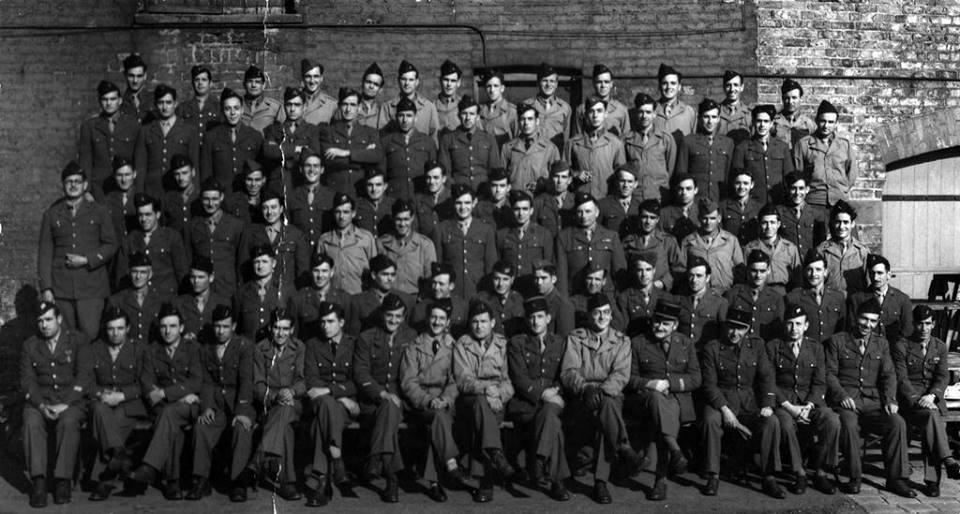 LIBERATION of PARIS: such a French injustice, The Nueve. Indeed, if I tell you: ……. “La Nueve” if I name you Amado Grannel, Firmin Pujol, Martin Bernal, Rafael Gomez…. who will be able to tell me who they are or what “la nueve” is.

In France, after our conflicts, we are used to remembering our fighters who were born in the metropolis. And to forget a little our Spahis, Zouaves, Senegalese, Indochinese or Malagasy riflemen, and so many others. Yet they shed their blood on all our fronts, to save “the mother country”. La Nueve is a little bit the same. Here I am going to ask you some questions and if you don’t know how to answer them then read my article.

You have understood the answer is the same: the Nueve

What is the origin of the Nueve?

Republican fighters had to flee Spain after Franco’s seizure of power. Many took refuge in France, in the south. After the German invasion, the Vichy government gave them 3 choices. Go back to Spain (death at the end). Work in Germany (collaboration). Join the foreign legion. This is what most of them did, and they went to Africa.

As soon as they could, they joined the army of the Free France, led by Leclerc. After the victory in Africa in 1943, they will join the 2nd AD. And among them 146 were to be grouped together in what was to become an elite unit. The 9th company of the Chadian marching regiment. “Nueve” means “new” in Spanish. The command will be given to Captain Dronne. He will be nicknamed “el patron”.

The Role of the Nueve in the Liberation of Paris

Paris has risen up, Leclerc is ready to take on the capital. The American command was less enthusiastic about the idea. However, the resistance weakened. Leclerc sends his first units to attack, for him it is crucial that Paris is liberated by … of the French . It is the Nueve, which will be the first entry into Paris. On August 24th at 8 p.m., the first halftracks enter the capital. Their armoured vehicles are named after the battles of the Spanish War, such as Teruel, Guadalajara and other more amusing ones. The penguins, a self-mockery given the nickname that the French gave to the Spaniards: the “espingouins”.

Lieutenant Amado Granell’s platoon reaches City Hall first at 9:30 pm. And after a quick fight they take possession of it. The next day, they capture the military governor of Paris, General von Choltitz, and hand him over to the Allies.

And who was Leclerc going to ask to ensure the safety of de Gaulle, at the head of the parade on 26th August 1944? At La Nueve of course. We can see an honour in it, but in fact it is pragmatism, because La Nueve was one of the best units.

What about the rest of the war?

They will continue the fighting, and participate in the Liberation of Strasbourg on 23rd November 1944. Leclerc thus fulfilled the oath he had taken after his victory at Koufra in Libya on 2 March 1941:

They are not going to stop and will be from Hitler’s eagle’s nest to Berchtesgaden. Of the 160 men in the column, only 14 will remain fit to fight in 1945.

Will they be recognised as heroes?

If the title of my article is: LIBERATION DE PARIS: such a French injustice, La Nueve. You can imagine that we are not going to give them the expected recognition. Whose fault is it? and why.

In his speech “Paris martyred but Paris liberated, by itself and by eternal France.” He doesn’t talk about allies or foreign troops. It was to remain for posterity a French victory won by French people. Moreover, there is an internal conflict between the communists (FTP, Rol Tanguy) and Gaullists (FFI, FFL).

To their political inclination

Most of them are anarchists. They did not fight for the liberation of France but for freedom as such, against facism. Leclerc had orally promised them that after defeating Mussolini and Hitler, they would be helped to overthrow Franco in Spain. However, international politics had other interests as a result of the Cold War.

Yes, but on an individual basis, the Nueve as such will not be distinguished.

What about today? LIBERATION OF PARIS: an injustice “so French”, La Nueve it was in 44

It was not until 2002 that a dozen commemorative medallions were affixed along the route taken by the Nueve between the Porte d’Italie and the Town Hall.

2012 for a French President (François Hollande) to pay tribute to them.

2015 And a socialist mayor (Bertrand Delanoë) and a deputy mayor of Spanish origin who is now mayor of Paris (Anne Hidalgo). A garden bordering the town hall has been given the name La Nueve.

2017 in Spain, in Madrid they also give the name to a garden.

Books, a song, a game

That’s enough to extend this article a little bit. with 2 books, including 1 comic book, dedicated to these soldiers, a song composed for them and a video game where we talk about it 🙂

Please close your eyes and listen.

n the game Steel Division: Normandy 1944 from Eugen Systems. The Nueve is present, heavily equipped, it is formidable in the game. 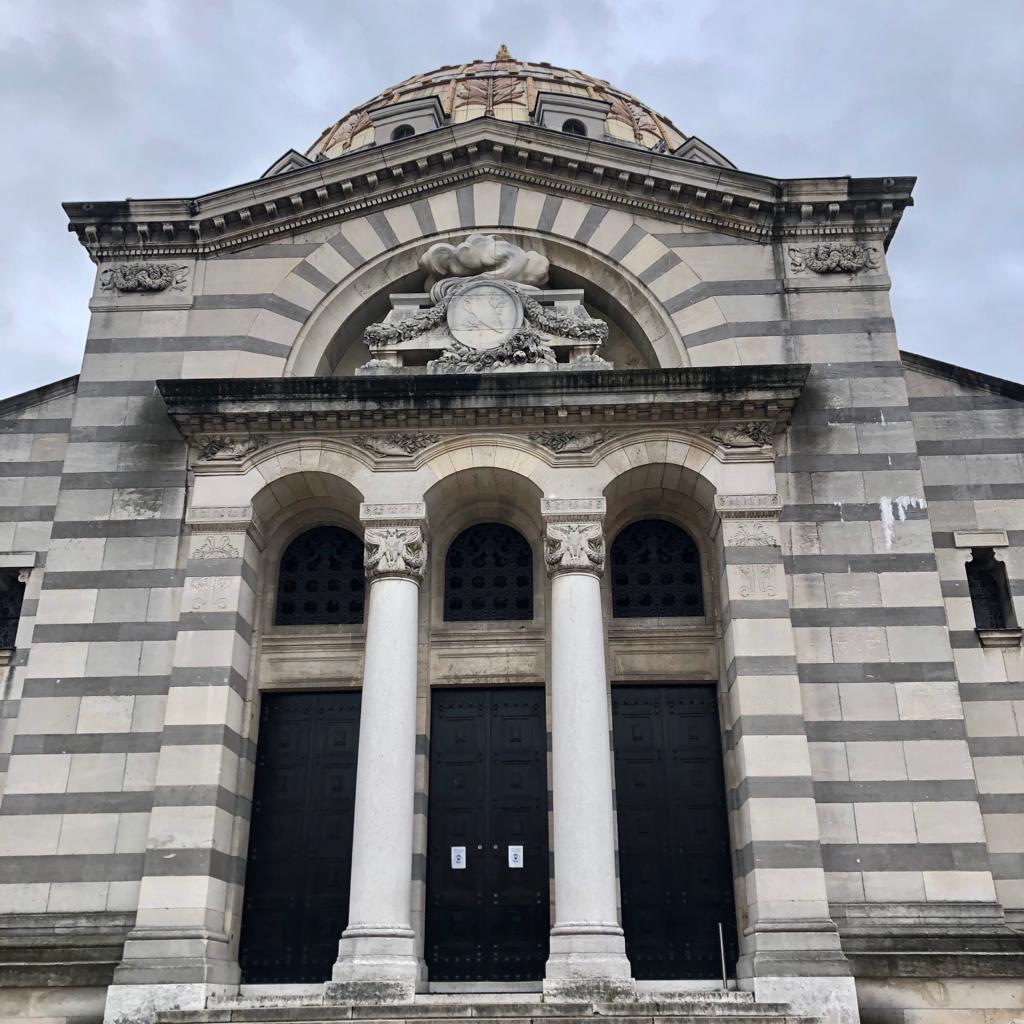 The crematorium-columbarium complex consists of a neo-Byzantine style chapel and four wings. The roof consists of a large brick and sandstone dome, three small half-domes and two chimneys. In the 1920s, the main dome was decorated with stained glass windows by Carl Mauméjean. The final columbarium consists of four levels: two in the basement and two outside and can hold 40,800 boxes. In the columbarium are many celebrities including the director Max Ophüls, the comedian Pierre Dac and the cenotaph of Maria Callas.

Oscar Wilde’s tomb: it is surrounded by glass, because since the 1990s a ritual had been taking place there – admirers would come and kiss it, leaving a trace of lipstick. Cosmetics were damaging the stone, so the glass wall was erected ……. So today they put the kiss … on the glass.

Edith Piaf and her young’s lovers

Grave of Edith Piaf: one of the biggest and most famous French singer, immortalized in the film “la môme”. She had a life far from a long quiet river, especially from a love point of view. Here she is not alone, as 3 of her young lovers lie close to her grave.

Tomb of Félix Faure: here is a politician who knew how to leave with panache. He was in the company of his mistress, at the Elysée Palace, as he was President of the French Republic in 1899. Well, he gave us an early “Bill Clinton” with Monica Lewinski, except that he had a cardiac arrest during the act, and died as a result.

Tomb of Jean Baptiste Clément : the name doesn’t mean anything to you? but the song you probably know : ” le temps des cerises “, interpreted among others by Yves Montand. Lets listen it, click here.

The grave for the fertility

Tomb of Victor Noir : What an incredible story. This journalist had written a very critical article on Prince Pierre Bonaparte, (nephew of Napoleon I and cousin of Napoleon III). He was just 22 years old, he went with a friend to the home of the prince who killed him with a pistol. This triggered popular riots, and further precipitated the fall of the Second Empire, which was faltering following the defeat of Sedan. Buried with a “gisant” (lying statue) on his grave showing him in the position where he died. You will find it strange that some parts of the statue are shiny. Indeed, visitors do come to rub parts of the statue, but which ones and why? First of all the feet, this is common. The place where the bullet is lodged in the chest is less common but understandable,

On the other hand … the mouth and the male part of his anatomy … this is stranger. In fact To show all the vigour of the deceased at the moment of his death, Jules Dalou (the sculptor) endowed his work with a virility well moulded by the trousers. From this sculptural irregularity is said to have originated a legend. According to which certain touches on the virile part of the Victor Noir statue, would bring fertility to young women. Here are the détails.