François Desset has managed to decipher Linear Elamite, a writing system used in Iran 4,400 years ago. In its archaic proto-Elamite version (as early as 3300 BC), it joins the two oldest known writing systems in the world, the proto-cuneiform of the Mesopotamians and the Egyptian hieroglyphics. Enough to change the knowledge we had until then about the origin of writing!

The announcement – very rare – must have delighted the mast of Abbé Barthélémy, Sylvestre de Sacy or even Champollion. The French archaeologist François Desset, from the Laboratoire Archéorient in Lyon, announced on 27th November 2020 that he had succeeded in deciphering inscriptions dating back 4,400 years! All were written in linear Elamite, a writing used by the Elamites who inhabited Iran at the time. The scholars gathered online to learn about this discovery from the Department of Cultural Heritage at the Universita degli Studi di Padova in Padua, Italy, were enthusiastic. For more than a century, this writing system, used on the Iranian plateau in the ancient kingdom of Elam (now Iran) between the end of the 3rd millennium and the beginning of the 2nd millennium BC, escaped decipherment, as is still the case with the Cretan linear A or the writing of the Indus Valley. Between marks of admiration and congratulations from his colleagues, the Frenchman, freshly arrived from the University of Teheran (Iran) where he has been teaching since 2014, explained in English that: “This writing had been discovered for the first time on the ancient site of Susa (Iran) in 1901 and that for 120 years we hadn’t managed to read what had been written 4,400 years ago because we hadn’t found the key”. Something that has now been done this year (thanks to the opportunity offered by the forty-somethings in his flat in Teheran and the collaboration of three other colleagues, Kambiz Tabibzadeh, Matthieu Kervran and Gian-Pietro Basello). 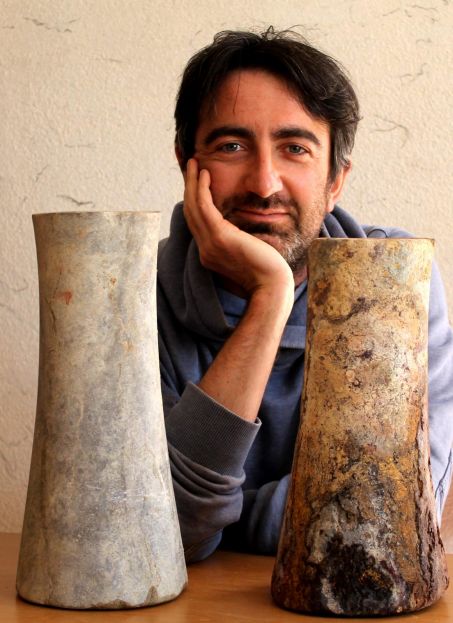 François Desset, archaeologist at the Laboratoire Archéorient (Lyon), professor at the University of Teheran (Iran), flanked by funerary columns found in tombs dating from the 3rd millennium BC, in Iranian Baluchistan. François Desset

The oldest examples of writing known to date come from Mesopotamia (present-day Iraq) and date back to the Bronze Age, around 3300 BC: these are the proto-cuneiform tablets. However, the deciphering of linear Elamite calls this supremacy into question! “Indeed, we discover that around 2300 BC, a parallel writing system existed in Iran, and that its oldest version – called the proto-Elamite writing, (3300 BC – 2900 BC) – was as far back in time as the first Mesopotamian cuneiform texts!” specifies François Desset. Also, I can say today that writing did not first appear in Mesopotamia and later in Iran: these two systems, the Mesopotamian proto-cuneiform and the Iranian proto-Elamite, were in fact contemporary! There was not one mother writing in which the proto-Elamite was the daughter, there were two sister writings. On the other hand, in Iran, there were not two independent writing systems either, as specialists thought until then, with the proto-Elamite on one side and the linear Elamite on the other, but the same writing which was subject to historical evolution and was transcribed with variations during two distinct periods”. 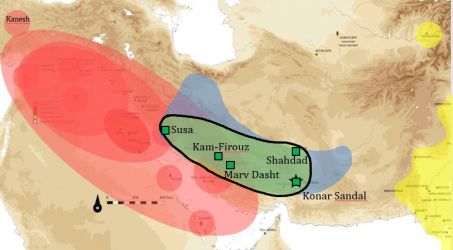 In green, the area of diffusion of linear Elamite writing in the 4th/3rd millennium BC.©François Desset

It is this most recent form of Iranian writing (Linear Elamite) that has been deciphered. At the present time, there are forty inscriptions coming from the south of Iran, from the ancient city of Susa, through Fars (with the region of Kam Firouz and the plain of Marv Dasht, right next to the famous Achaemenid site of Persepolis) then the south-east of Iran with Shahdad and the famous site of Konar Sandal / Jiroft. Unlike the Mesopotamian cuneiform, which is a mixed writing system combining phonograms (signs transcribing a sound) with logograms (signs transcribing a thing, an idea, a word), linear elamite has the particularity, unique in the world in the 3rd millennium BC, of being a purely phonetic writing (with signs noting syllables, consonants and vowels). Used from around 3300 to 1900 BC, Iranian writing evolved considerably between its oldest texts (Proto-Elamite tablets) and its most recent ones (linear Elamite texts), notably with a “skimming” process. Of the 300 initial signs used to note proper names in the Proto-Elamite tablets (the great majority of which are currently kept in the Louvre Museum), only 80 to 100 will subsequently remain in Linear Elamite, its most recent version. About a hundred signs were therefore used continuously for some 1400 years and generally written from right to left and from top to bottom. “In order to work, we divided the forty or so texts available to us into 8 corpuses, according to provenance and period. Linear Elamite was used from 2300 to 1900 BC during the reign of different rulers and dynasties and in different regions”, the archaeologist continues. Most of the texts are fairly repetitive royal inscriptions dedicated to ancient gods, such as: “I am [name], the great king of [name], the son of [father’s name], I made this object for [name of god or person]”.

For François Desset, the “trigger” of the deciphering occurred in 2017 during the analysis of a corpus of 8 texts written on silver vases, described as “gunagi vases”, dated around 2000-1900 BC and coming from tombs in the Kam-Firouz region (currently kept in a private collection in London). As these vases had highly repetitive sequences of signs, standardised in fact, the archaeologist was able to identify the signs used to record the names of two sovereigns, Shilhaha and Ebarti II (both reigned around 1950 BC) and the main deity venerated at the time in south-western Iran, Napirisha. 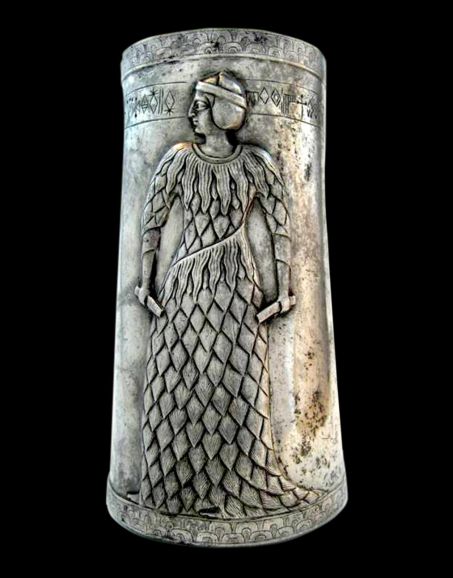 This first stage of deciphering, published in 2018, led this year to the complete deciphering, which will be scientifically published in 2021. For example, the deciphering of a magnificent silver vase discovered in the Marv Dasht region in the 1960s and currently kept in the National Museum in Tehran (Iran), where it now reads: “To the lady of Marapsha [toponym], Shumar-asu [her name], I made this silver vase. In the temple that will be famous by my name, Humshat, I have placed it as an offering for you with kindness”. The result of years of hard work. “I have been working on these writing systems since 2006,” explains the researcher at Sciences et Avenir. I didn’t wake up one morning telling myself that I had deciphered linear elamite. It took me more than 10 years and I was never sure I would get there.

Linear Elamite writing notes a particular language, Elamite. It is a linguistic isolate that cannot be linked at present to any other known linguistic family, such as Basque. “Until this deciphering, everything about the populations occupying the Iranian Plateau came from Mesopotamian writings. These new discoveries will finally allow us to access the point of view of the men and women occupying a territory they used to call Hatamti, whereas the term Elam, by which we knew it until then, in fact only corresponds to an external geographical concept, formulated by their Mesopotamian neighbours”. 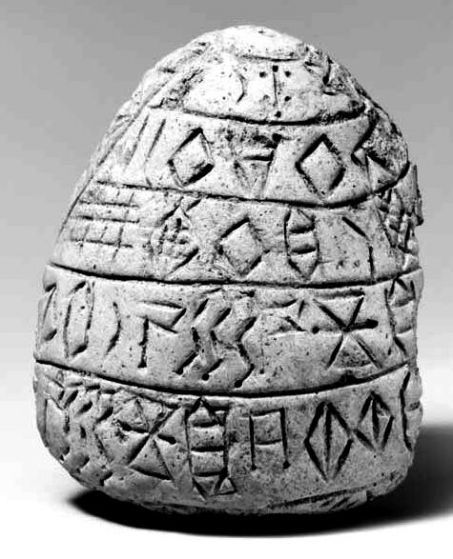 This breakthrough in deciphering has important implications in three areas, continued François Desset: “on Iranian history; on the development of writing in Iran in particular, and in the Near East in general, with considerations on the continuity between the proto-Elamite and linear Elamite writing systems; and on the Hatamtite (Elamite) language itself, now better documented in its oldest form and made accessible for the first time by a writing system other than the Mesopotamian cuneiform.

For Massimo Vidale, the Italian protohistorian who organised the Padua conference, (whose work has just been published by Sciences et Avenir on the site of “Hatra, the City of the Sun God” (Iraq), in his magazine dated December 2020, currently on newsstands), “France, through this new deciphering, maintains its primacy in the “cracking” of the old lost writing systems”. As for François Desset, he has already embarked on the deciphering of the oldest state of Iranian writing, the proto-Elamite tablets, for which he considers he has now opened a “highway”.

Article published in Science et Avenir by Bernadette Arnaud the 12.07.2020