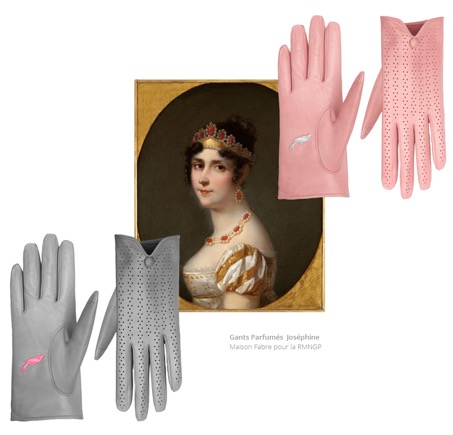 Perfume, and perfumers, a love story with Paris. How can we not associate fashion and haute couture with perfume. Chanel yes, but Chanel n°5, Hermès yes, but Terre d’Hermès.

Long before Paris, perfume, for more than four millennia, has been present in the most unexpected places. Its history belongs to that of
cultures from all over the world, the art of blending scents, originating in the
Near East, penetrates further west, into Greece and Rome, before reaching Asia through the Arab herb merchants. In Europe, the first centre of perfumery was Renaissance Italy, before France took precedence in the 18th century.

The term comes from the Latin “per fumum” which literally means through smoke, because the first perfumes consisted of aromatics burned like incense for the gods and ancestors.

But did you know that perfumers and glove-makers have long shared a common passion?

As early as the 12th century, tanners settled in the Provençal town of Grasse to tan the skins, it was necessary to purge the bad smells. However, the smell of the hides, despite their quality, remained nauseating. The nobility’s infatuation for gloves therefore diminished sharply while the perfume was a resounding success. The profession of perfumer was born from there. `

At the end of the 15th century, the Marquis Pompeo Frangipani is said to have invented an almond-based perfume to conceal the strong odour given off by his leather gloves. This is how the idea of perfuming his gloves was born… Later, Catherine de Medici imported the fashion of the perfumed glove from Italy.

As a result, the glove industry developed considerably in France and abroad.
abroad. Leather gloves were perfumed by two processes: either by soaking with an aromatic solution or by rubbing with a paste scented or wax, inside and out. The manufacturers accessories could then be distinguished by the intensity of the perfume used.
In France, for example, the aromas were sweet with a base of
violet, iris or orange blossom.

Until in the middle of the 19th century, scented gloves were considered to be
luxury accessories as they required a production processrelatively complex.

In short, it was a luxury that only the very rich could afford. Nowadays, great perfumers have tried to revive the tradition. In 2012, the house of Causse launched a limited edition pair of gloves, flavored with a floral and fruity scent, Mûre et Musc Extrême. This is also the case for Guerlain, in 2014, which has released two models of scented gloves: Le Gant La Petite Robe Noire (with the house Agnelle) and Le Gant du Parfumeur. Or the House of Fabre who created the scented gloves

You can find this history of the glove and the perfume through one of our visits. Either a global approach to French chic during our tour of Paris on the right bank, or by delving deeper into the subject of perfume and gloves during a visit devoted to this subject or through a perfume creation workshop with one of our perfumer partners.