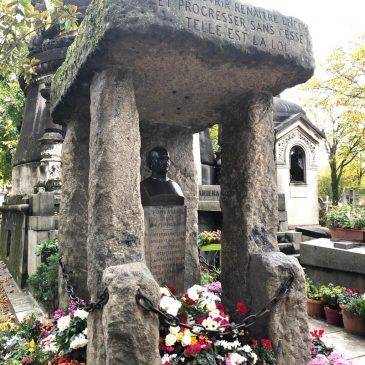 Welcome to this 3rd article on Père Lachaise, if you want to find the other articles on Père Lachaise click on these links: “the history of Père Lachaise“, “incredible tombs“. Today we are going to talk about ghosts and supernatural or even satanic events.

If you question the guards they will of course tell you about Edith Piaf’s ghost or Sarah Bernard’s ghost. How many masses or satanic rituals were performed after closing time? Would you like to spend the night in the middle of 70000 graves?

Miss Clarion and her lover

In the alley of dragons, we are told about the ghost of a man whose heart is broken by a beautiful actress. By a disturbing coincidence, an actress, Mademoiselle Clairon, has been buried in this same alley since August 29, 1937. She, harassed by a man madly in love with her, is said to have turned him away and driven him to suicide……

Countess Demidoff, the lady in white

Let’s continue in this alley and we will find a gigantic funerary monument, that of Baroness Stroganoff, wife of Count Demidoff . Exiled in Paris, separated from her husband, she died at the age of 40 at the head of an imposing fortune. She would have deposited a will, which according to the terms would bequeath her fortune to the man who would stay next to her body, in the grave, for 365 days and 366 nights. There were 3 attempts but the unfortunate ones went mad. Nevertheless, the white lady, as she was known, would continue to walk through the cemetery to attract candidates to her. One of the photos is a candidate’s letter dated 1893 from the small town of Monmouth, Illinois.

Another strange fact that would appeal to Dracula’s lovers. The Countess might have been a vampire. Look at the date of her death 18/1818 … Three 8: the symbolism of vampires and the four wolf heads that surround the mausoleum, again a vampire symbolism.

The body and the heart of Chopin

This beautiful tomb is that of Frederic Chopin, a Polish-French composer. He loved his two countries so much, but above all he was so afraid of being buried alive that he had his body buried in Paris and his heart in Warsaw.

Allan Kardec, the master of spiritism

We are now going to be in touch with the supernatural, by evoking the master of spiritualism: Hippolyte Rivail born in 1804, in Lyon. This name doesn’t mean anything to you? normal because he changed it to Allan Kardec. Which would correspond to his identity in a previous life, when he was a Druid. He was going to take part in communication sessions with the deceased. He was then 51 years old and he was going to study and develop this practice coming from the United States.

He will become the reference, and will enact a true spiritualist doctrine and will draw from it 5 books which remain today the reference on the subject. His “clients” were very famous people, such as Victor Hugo or Sherlock Holmes’ father: Sir Conan Doyle. He is known to have said : ” After my death, if you come to see me, put your hand on the neck of the statue overlooking my grave, then make a wish. If your wish is granted, come back with flowers. ». Well look at the photos and you will see that his tomb is one of the most flowered, so …..

The ghost of Jim Morrison

The most famous international ghost is undoubtedly the co-founder of the Doors group: Jim Morrison. In 1997 during a trip to Paris, Brett Meisner, a rock historian, visited his grave and asked a friend to take a photo of him in front of his idol’s grave. But when he presents the photo to one of his assistants, he makes a stunning discovery. In the photograph, behind Brett Meisner, a white-clad figure appears who looks very much like Jim Morrison. This photograph was studied and re-studied and no suspicious editing or special effects could be discovered. It is therefore clear that this image is more than disturbing.

the cursed lovers of the Middle Ages

Let’s talk about the most famous cursed lover’s couple in the cemetery. For that we have to go back to the Middle Ages. A young woman, Heloise, falls in love and also pregnant with Abelard. Up to this point nothing very abnormal. Except that Abelard was Heloise’s teacher … In this case, indeed, we are going beyond the acceptable and if we know that in the Middle Ages teachers were mostly religious … Then we understand that we have crossed the limit. The two lovers ran away, but Heloise’s father sent two henchmen to find them.

Heloise was locked up with their son in a convent for the rest of his life, and Abelard was cut off so that he would never be able to repeat his crime again (I think you get what they cut). However, love was the strongest, and they continued to write to each other. When they died, they were buried side by side in Heloise father’s house on the Ile de la Cité in Paris, right next to Notre Dame. Legend has it that the lifeless body of Abelard opened his arms to welcome his beloved. Their remains were transferred to Père Lachaise in a magnificent mausoleum.

And to conclude this article on Père Lachaise, a nod to a famous American series. One of the last graves leaving the cemetery is that of the family … Adam, would he have removed a D to reduce our vigilance?

2 thoughts on “The ghosts of Pere Lachaise”